Bing & Grøndahl was founded on April 15, 1853, by Grøndahl, who was a figurine maker for the Royal Danish Porcelain Factory, and the Bing brothers, who were art and book dealers. Initially the company produced bisque figurines. The company then extended production to include high style dinnerware and coffee sets. From the 1950s to the 1980s, their signature Seagull design was considered the "National Service of Denmark". During that period one out of
every ten Danish households owned some of the dinnerware service. In 1895,
Bing & Grøndahl created the first in their series of Christmas plates. Designed
with a traditional winter scene in cobalt blue and white, the plates have been
released annually for more than 100 years. Noted as desirable by collectors,
this series became responsible for a large portion of the company's production.
Display: List / Grid
Show:
Sort By:
Product Compare (0) 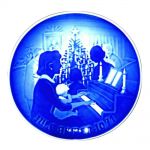