Hornsea Pottery was originaly located in the seaside town of Hornsea in the East Riding of Yorkshire, England Their earliest pieces included Character Jugs and posy vases with attached animal figures. Hornsea tablewares were sold worldwide for over 20 years. Hornsea Pottery became one of the major producers of pottery and tableware in the U.K. and at one stage their Heirloom tableware was in such demand that stores had to be limited.
Display: List / Grid
Show:
Sort By:
Product Compare (0) 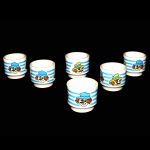